I made an end-grain cutting board, and it’s about the coolest thing. It’s 1 3⁄4” thick and made from white maple. I’ll take you through the steps I followed.

I’ve been a metal guy for years now. I love welding, I love machining, but recently I discovered that glued wood joints can be far stronger than I ever thought. We kinda needed a second cutting board, so I watched a few videos and read a few guides and decided I could probably build one. Last Wednesday I sketched out some plans, and worked out that I needed two pieces of 8⁄4” wood measuring at least 7 1⁄2” by 24”, ideally walnut or maple or cherry.

I went to Owl Hardwood on Wednesday night and picked up a really nice piece of 8⁄4” maple, measuring about 49” by 10”. That piece was about $60 out the door (nice hardwood is surprisingly expensive!). I took it by the South Side Hackerspace on Friday, cleaned up the edges, and cut them into two inch strips, and got them glued together.

Of note, the table saw sled I used was not perfectly square. I wound up having to flip some of the strips around so that the resulting workpiece was more or less square. I’ll probably have to build a new table saw sled one of these days.

Wary of the out-of-square sled, I cleaned up the edges on the sliding compound miter saw. I was able to work quickly and keep burning to a minimum. 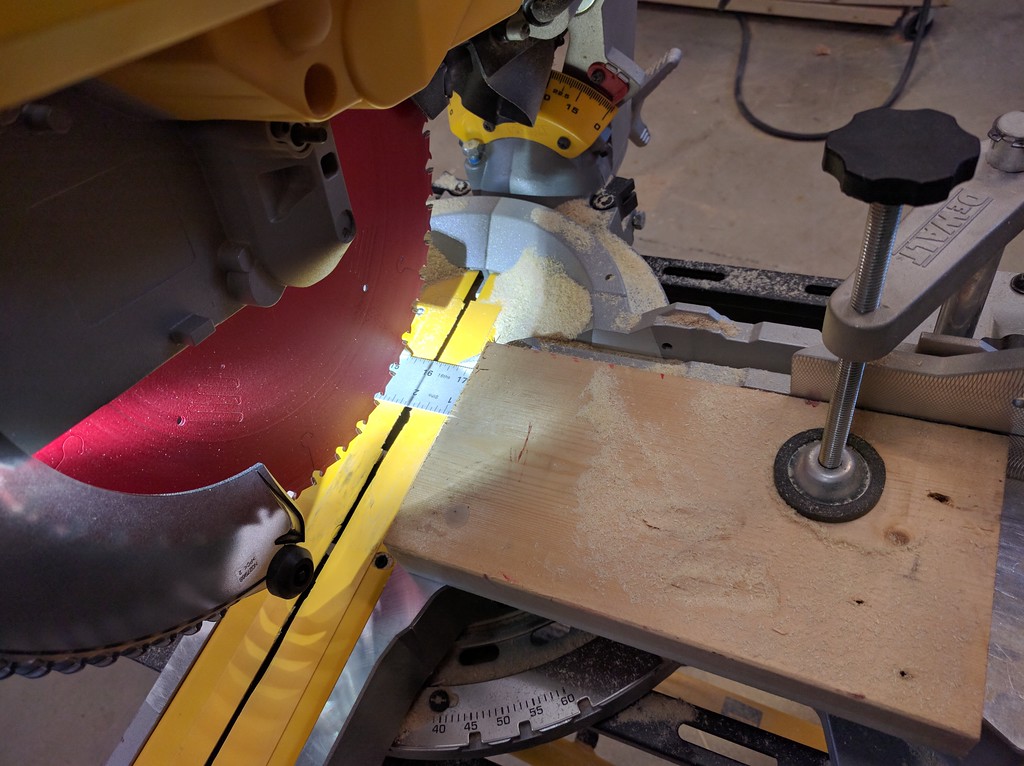 Then I cut my workpiece crossgrain into 2” strips… 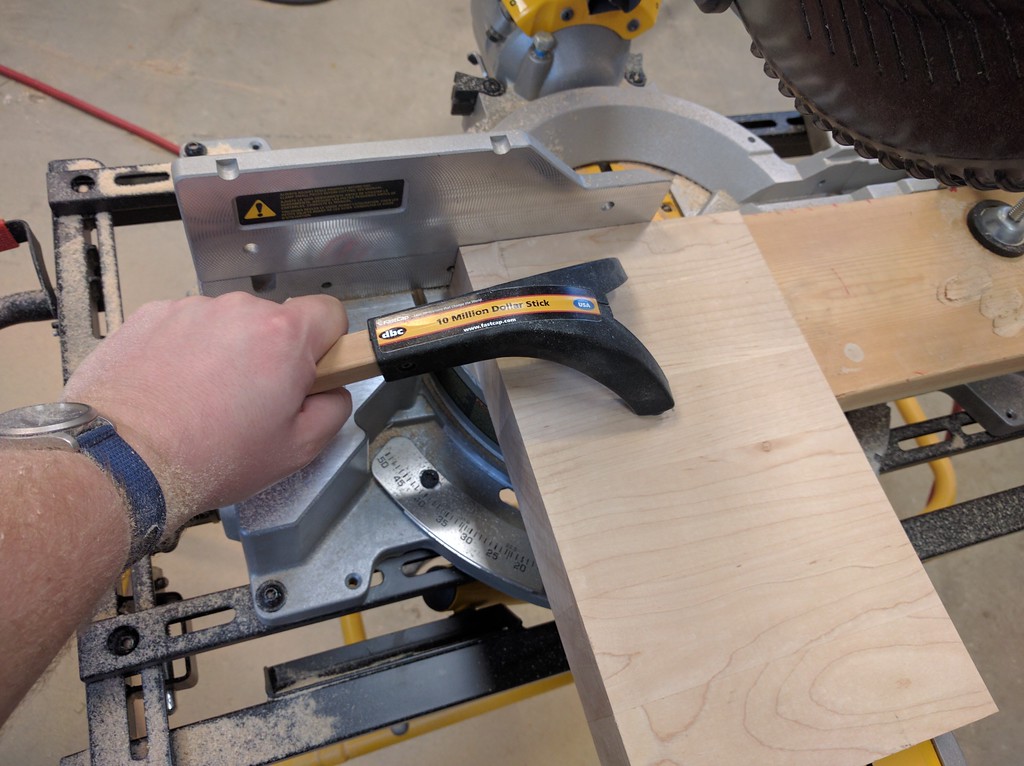 and I set the strips on their sides, like so. 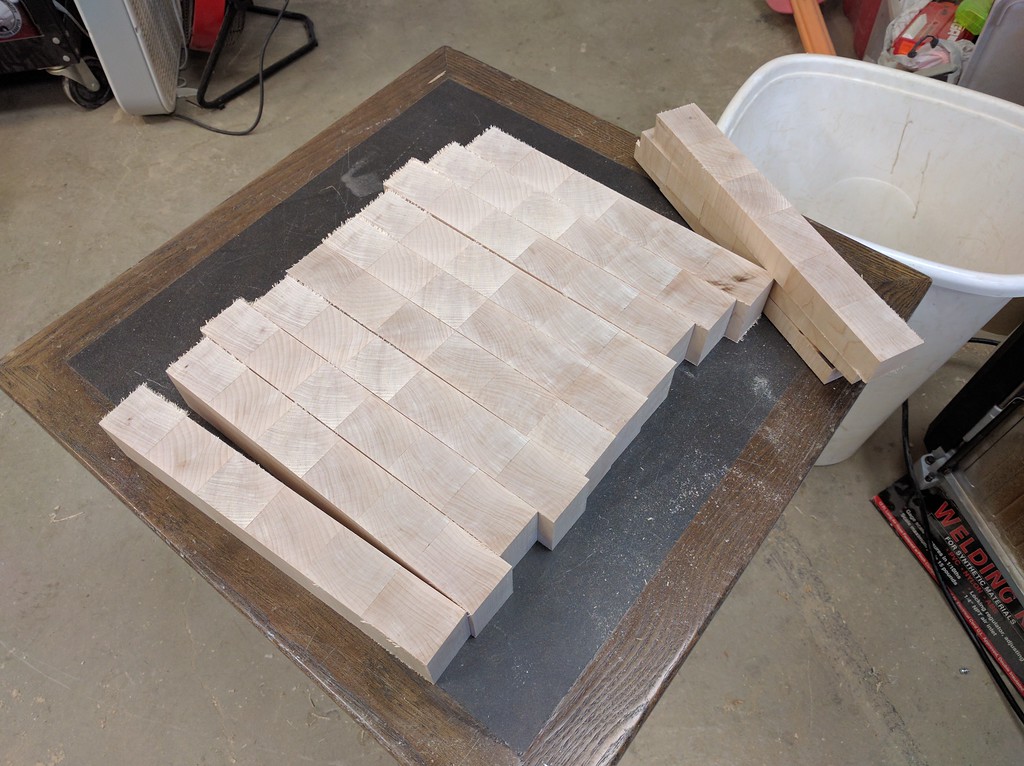 The strips had a little bit of tearout on the sides that was preventing them from joining up nicely with one another, so I put the smallest chamfer on the corners with a Stanley #27 block plane.

When all was said and done, it looked like this:

I arranged the pieces in the clamps and flipped every other piece around to get a nice checkerboard pattern.

I reused the precision pine jig to make a custom pine glue spreader, like so:

Then I applied glue…

and gave it the squeeze.

After letting it sit about an hour, the glue was hard enough to work with. I squared up the miter sled on the table saw and cleaned up the edges.

I then planed the workpiece down. The planer was really disliking cutting the end grain like that, so I wound up having to go super slow, turning the height adjustment no more than 1/8th turn at a time (probably taking off somewhere between 1⁄64” and 1⁄32” at a time). The planer really beat the trailing edge to heck, so I cleaned that up on the table saw as well.

I put a 1⁄4” roundover on the corners with a router, then started sanding. Two problems exposed themselves here: First, I really should have bought new sandpaper (maybe starting with 80 grit, then moving up to 200 and finally 400 grit) rather than just using the 200 grit that I found. The planer’s blade needs replacing, and it left some deep scratches in the surface that sanding was able to minimize, but you can still see them. Second, sanding on the table saw like that caused me to pick up some of the 3 in 1 oil I used to oil the table. Whoops!

Finally the workpiece was sanded and ready to take home.

I bought a couple bottles of butcher block oil (just food grade mineral oil) and a thing of butcher block wax (just food grade mineral oil and bee’s wax) from the Home Depot. At this point my friend Erin will be yelling “No you idiot it’s so much cheaper to buy that oil in bulk! I told you I had some!” But it was late, and I was impatient, so I was willing to spend a few extra bucks to get it done.

Once home, I soaked both sides in oil. I poured a bunch on, spread it around with a paper towel, and waited 15 minutes. I did this three times per side with the oil, then once per side with the wax. The oil brought out the wood’s pattern, and it looks amazing.

My wife helped me pick which side was the bottom, and I installed some anti-skid rubber feet. I might replace the screws with stainless hardware down the road, but this will work for now. Deciding to install feet on one side is a trade-off; I could leave both sides open and make the cutting board reversible, but having feet on the bottom makes it slip around less and also lets air flow on the underside to help it dry off. As an aside, installing the feet was my first chance to use my new Makita drill and driver, so I was excited!

I flipped it back over and let it sit overnight. The oil oxidizes and forms a semi-hard sealing layer. I re-coated the board the next morning, and again later the next day. I got to use it last night to chop some star fruit, and I can’t tell you how exciting it is to have made something this beautiful and functional with my hands.